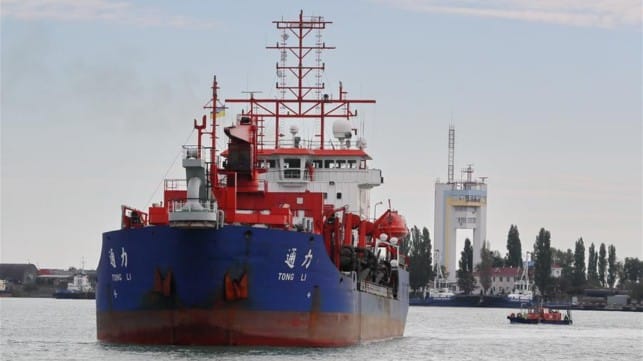 KIEV, Oct. 12 (Xinhua) — A huge hydraulic excavator is grabbing a coat of grey muck and loading it on barges, which transfer the waste to the dump site — Ukraine’s Black Sea port of Yuzhny is in the midst of the major dredging operation.

The Beijing-based China Harbor Engineering Company (CHEC) is carrying out the dredging, helping Ukraine to transform the Soviet-built port into a modern maritime facility and write the new chapter in the history of Yuzhny.

Founded in 1978, Yuzhny is one of the three major ports in Ukraine. Last year, it became the busiest seaport of the country, having reloaded 39 million tons of commodities or 30 percent of Ukraine’s total maritime cargo turnover.

The dredging is a key part of the Ukrainian government strategy to make Yuzhny an important transport hub on the crossroads of global trade and a link in the China-proposed Belt and Road Initiative.

The CHEC won the contract worth 38 million U.S. dollars on upgrading the port in mid-April, getting ahead of four leading dredging and marine services companies from Europe.

Lin Tao, the head of the representative office of CHEC in Ukraine, said the Chinese company decided to enter the Ukrainian market after the introduction of an innovative tendering system in the Eastern European country.

“In 2016 the Ukrainian government presented a platform for electronic procurement ProZorro. It seems to us that it opened the opportunity for fair competition among all contractors, so we decided to participate in the tender for the implementation of this project,” Lin told Xinhua.

In July, the CHEC has started the dredging works, which are aimed at deepening the approach channel of the port from 16 meters to 19 meters. The works initially were set to be completed in March 2018, but now they are running ahead of the schedule.

Maksym Shyrokov, the head of Yuzhy port administration, said the Ukrainian side is very satisfied with the cooperation with the Chinese company.

“The arrival of the equipment was at the agreed time, the beginning of the work was also timely. The performing of all the documents, obtaining all necessary licenses and permits was made by the Chinese company clearly, on time and without violations,” Shyrokov told Xinhua.

“I can only envy myself and boast that we are working with the Chinese company CHEC,” he added.

Shyrokov was echoed by Vitaly Lipsky, the chief engineer at Yuzhy port, who said the technical side of the cooperation with Chinese partners is perfect.

The dredging crew of 21 equipment units is currently working at Yuzhny. They have already removed about 1.7 million cubic meters of muck from the Yuzhny bottom, completing about 25 percent of the first part of the dredging project.

The project is estimated to allow the entry of large cargo ships in the port, expanding the productivity of the maritime facility and creating additional opportunities for Ukraine to boost its trade.

The prospects look particularly promising for agriculture trade in the light of the fact that a major grain terminal with the annual loading capacity of 5 million tons of grain is under construction at the port.

Together, the dredging and the terminal construction projects are estimated to boost Ukraine’s grain exports by 15 percent once completed.

Rayvis Veckagans, the head of Ukrainian State Seaports Authority, said the dredging project may also help the Yuzhny port to become a transit facility on the Silk Road.

“We must focus especially on the promotion of geographical transit. This concerns cargo flows from Asia to Belarus, Moldova, Poland and Germany,” Veckagans said.

Ukraine has formally joined the Silk Road project in 2015, launching a train to China via the sea-rail Trans-Caspian International Transport Route through Georgia, Azerbaijan and Kazakhstan.