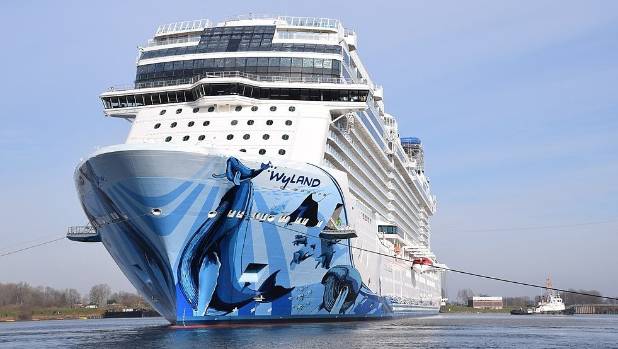 Another giant new cruise ship is just hours away from sailing with paying passengers for the first time.

At 168,082 tons, Bliss is the largest ship ever for Norwegian and one of the 10 largest cruise vessels of all time from any line.

Capable of holding up to 4004 passengers at double occupancy, Bliss has been under construction for more than a year at the Meyer Werft shipyard in Papenburg, Germany. Meyer Werft delivered Bliss to Norwegian on Thursday during a ceremony in Bremerhaven, Germany.

Bliss is arriving just three weeks after Royal Caribbean unveiled its biggest ship ever and Carnival Cruise Line added a sizable new vessel of its own. Together, the three newcomers are bringing more than 14,000 new beds to the cruise industry in what amounts to an unusually clustered burst of expansion from three of the biggest lines.

Bliss isn’t nearly as big as Royal Caribbean’s new vessel, Symphony of the Seas – at 228,081 tons, the world’s biggest cruise ship. But it is significantly larger than Carnival’s new vessel, the 133,500-ton Carnival Horizon.

Bliss is the third ship in Norwegian’s Breakaway-Plus series, which also includes the 165,157-ton Norwegian Escape and 167,725-ton Norwegian Joy. The two earlier vessels debuted in 2015 and 2017, respectively.

Designed to have all the trappings of a major mega-resort, Bliss features such over-the-top amusements as a two-deck-high racing course where passengers compete against each other in electric go-carts — a first for a cruise ship catering to North Americans.

Like Joy and Escape, Bliss also has a sprawling water park with multistory water slides; a restaurant-lined boardwalk; Tony Award-winning production shows, including Jersey Boys; and a giant spa. Dining options include a modern Texas barbecue eatery called Q that will feature live pop country music – a new concept for the line.

Bliss will spend the coming summer sailing to Alaska out of Seattle. It’s also scheduled to sail out of Miami and New York over the next two years.

The deployment to Alaska is notable in the cruise industry as Bliss will be the largest cruise ship ever to sail in the state. In a nod to the deployment, the vessel is adorned with hull art by marine artist Wyland that includes a giant image of a mother humpback whale and her calf. It’s called Cruising with the Whales.

With the arrival of Bliss, Norwegian has 16 ships.